How do I register for the Summer Splash Tournament?
﻿You must login to our website to confirm your email. Make a payment online with your credit card to complete your registration. To pay by cheque: Mail the cheque to Box 1, 4901-55 Avenue Beaumont, AB T4X 1M9 cheques are to be made out to “Beaumont Soccer Association." And must be received by Jun 10th, 2022. Registrations are considered complete only once payment has been received. Once your registration is complete your team will be added to a group/pool for the tournament. Groups/Pools for the tournament will be created based on current tier and league standings. Careful consideration is taken to create groups/pools made up of teams of similar caliber and strength.

Can I make schedule requests for the tournament?
﻿We accept scheduling requests for the following reasons: If you are coaching 2 teams in the tournament you can make a request to avoid scheduling conflicts with both teams. If you have a league game on any of the tournament days you can request to play the tournament games around the league game schedule. If your team is arriving from greater than 2 hours (220 Km) away you can request to not play on Friday evening. Our schedulers will do their best to accommodate requests, but that is not always possible and we ask teams to be flexible. To make a scheduling request, you must put the request in the notes for your team’s profile on the tournament website. Once the schedules are posted they are considered final and changes will only be made if an error has occurred or a team withdraws. It is each team’s responsibility to review the schedule for updates as changes may occur.

What is the ASA - Official Provincial Roster?
﻿The ASA Official Provincial Roster is the official list of all the registered players on your team with their birth dates and district registration number. You may need to contact your soccer organization for a copy of your ASA Official Provincial Roster. Calgary teams may submit their CMSA roster that is generated from Goal line. Every player that participates in the tournament must be registered on a provincial roster, this includes all guest players. If your team is from outside of Alberta, then your travel permit will suffice. All official team rosters need to be uploaded directly to the tournament website using the Upload button once logged in.

What fields will my team play on for the tournament?
﻿Teams will be scheduled to play on fields in the town of Beaumont, AB. All fields are easily accessed off of 50 Street. There are maps for the field locations on the tournament website. All fields will be set up with nets and flags you do not need to bring the equipment. You will need to bring your own soccer balls for warm up as well as a First Aid Kit for your team. The home team will need to provide two game balls.

Where do I hand in the game sheets?
﻿Where do I go to find tournament stats? Official Summer Splash Tournament game sheets will be used throughout the tournament and are available to print off the website. When your team’s registration is at 100% and the schedules have been posted, you will see the Green button “Download Game Sheets” and you can then print your game sheets. Game sheets are to be completely filled out and given to the game official prior to the start of each tournament game. Ensure all players (including all guest players, labeled as “guest”) are listed on the game sheet. Any player not listed on the game sheet prior to kick off will be ineligible to play. If there are players not playing in that particular game, but are listed on the game sheet, you are required to cross off their names. The players listed are to be the actual players that participated in that game. Teams are to ensure that the jersey numbers for each player are correct on the game sheet and correspond with the jersey numbers the players are wearing during the game. It is the responsibility of the Centre Referee to bring both game sheets immediately after the game to the tournament field headquarters. Tournament stats will be updated on our website during the tournament.

Where are the medals presented?
﻿Gold, Silver and Bronze medals will be awarded to the top three teams in each group. The medals will be presented after the medal game in each group has been played and the results have been confirmed by tournament organizers. Bronze medals could be awarded on the Saturday. Teams will have their medal presentations take place at Tournament Main Headquarters near the Milieu East 1 field – 37 Coloniale Way, Ecole Coloniale Estates School, Beaumont, AB.

What happens if our jerseys conflict with the opposing team?
﻿If the Centre Referee determines that the team jerseys conflict in any way it will be the responsibility of the home team to change jerseys or wear alternate color pinnies. 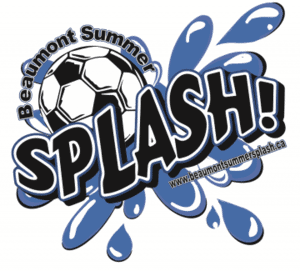